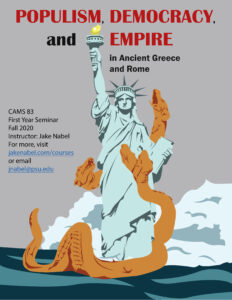 In recent years, talk of “populist revolts” has seized headlines across the globe, especially in Europe and the United States. These movements are diverse, but they share common elements, especially mistrust of elites, resistance to immigration and cosmopolitanism, and appeals to the dignity of a narrowly defined “common people.” This course will trace this brand of politics to the ancient Mediterranean, where the societies of Greece and Rome were sometimes riven by similar tensions. Case studies from Athens, Sparta, and Rome will explore the domestic pressures that animated ancient populist movements, as well as the exacerbating forces of foreign conquest and imperialism. Readings will include works by ancient authors (in translation), but also modern scholarship in political science and comparative history. Assignments will afford training in political oratory and policy writing in addition to academic prose.